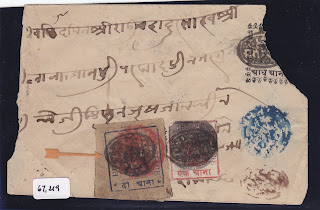 The highest catalogued stamp of Indian Feudatory States (2007 Stanley Gibbons), unique (SG2b), alongwith another rarity (SG3a) on the only known cover of the Duttia first issues !!

I know of only one item that satisfies the strict criteria laid in the post on overseas philatelic rarities in context to India- one belonging to the princely state/feudatory state of Duttia (also known as Datia).

The rarest of the Indian stamps include the Inverted Head 4 Annas (pre-independence) and the Gandhi 10Rs Service stamps (post independence). Of course, neither even comes close to the rarity or the significance of the Duttia cover (as per Stanley Gibbons, 27 of the inverted heads have been discovered and approximately 8 or 9 of the Gandhi are in private stock including one in my collection).

The description of the item as per the expertization certificate is as follows : "Duttia 1896 1/2 a postal stationary envelope with blue control handstamp (Deschl E4), registered, franked with 1896 1a red black control handstamp (SG3a) and c.1894 2a grey-blue on yellow with red control handstamp (SG2var), envelope and adhesives cancelled by oval black intaglio seals, with red-brown oval handstamp alongside, red manuscript registration on reverse, is genuine Sd - Philip Kinns"

The Duttia cover had set a new record in 2006 for Indian Princely States Philately (and for that matter for Indian Philately) with one of the under-bidders being the most reputed firm in British Commonwealth Philately. While the auctioneer understood the significance of the item and placed a high reserve value, they did not accurately describe the item (i.e. "a stamp hitherto unknown"), and as well not point out that one of the stamps was unique. In addition (and also not advertised), the postal stationary cover on which the stamps were added for registration is rare - being of an un-cataloged error of type printed inverted.

How many 2 annas (SG2 including all sub-types/variations/used) are known ?

From "Dilemmas of Early Duttia by Frits Staal 1992" - Of the two annas , I have seen or found illustrations of seven copies, which are all different from each other.

How many 1 anna reds (SG3 including all sub-types/variations/used) are known ?
From "The Stamps of the Indian Feudatory States by Col Douie - Philatelic Journal of India 1934" - Though not strictly relevant to this article, it may not be out of place to refer to the 1 anna red stamp which is commonly supposed to be a contemporary of the first issue. The stamp is excessively rare. There was a copy in the Hind sale, and Mr Sefi recently showed me another. These two and a copy in my own collection are the only ones of which I have any record. The ink is rather too liquid, making judgment difficult, but the figure of Ganesh appears to be of the small type without the characteristic break in the trunk. If this is so, it is strong evidence that this is the earliest stamp issued by the state. Fortunately the shade of the stamp, and the arrangement of the lines of printers rule, render successful forgery practically impossible. More recent estimates would place the numbers of the 1 anna reds slightly more at perhaps 10 copies.

How many covers/ used on piece postal history items are known bearing stamps from SG1-SG7 (the early issues and including all variations/sub-types) ?

Only this one !!!!
Posted by indrajit chatterjee at 8:27 PM No comments: